SPAA Turning 15: Discussing the Past, Present, and Future with Esteemed Faculty 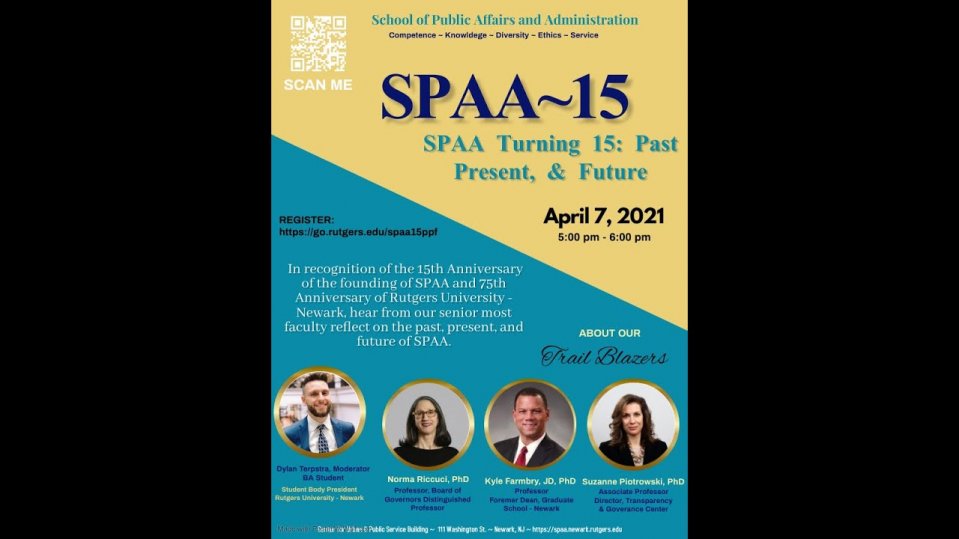 SPAA Turning 15: Past, Present, and Future

On April 7, as part of the celebration of Rutgers SPAA’s 15th anniversary and the 75th anniversary of Rutgers University–Newark, some of the most senior faculty at the School of Public Affairs and Administration shared their reflections of SPAA from before and after it became the sixth school at RU-N. The panelists included Professor Kyle Farmbry, Associate Professor Suzanne Piotrowski, and Board of Governors Distinguished Professor Norma Riccucci. SPAA student Dylan Terpstra moderated the panel presentation and Dean Charles Menifield gave closing remarks.

The School of Public Affairs and Administration (SPAA) at Rutgers University–Newark was established by the Rutgers Board of Governors in 2006, with Dr. Marc Holzer as founding dean, after providing doctoral and master’s public administration education for over 30 years as a department through the Rutgers–Newark Graduate School. The faculty panelists, who were all part of the department, talked about SPAA becoming a school and relocating across campus from various floors in Hill Hall to its own building at Rutgers-Newark.

Dr. Riccucci spoke about how Dr. Holzer spearheaded the effort to transition from a department to a school and ultimately into its own space. “He was very instrumental in moving us into a wonderful new building, and just the environment makes a huge difference when you you’re teaching,” she said. “But beyond that, moving us to a school status really elevates our stature in the field.” That has helped lead to greater recognition, she said – as a school, SPAA consistently places high in national rankings.

“We were able to be a lot more visionary once we became a school, partially because we had a degree of autonomy that we didn’t have beforehand,” said Dr. Farmbry. As a school, SPAA was able to more easily launch its undergraduate program, which recently celebrated 10 years of granting bachelor of arts degrees in public and nonprofit administration.

Dr. Piotrowski spoke to the ways SPAA has adapted over the past 15 years, such as evolving the course curriculum to meet student needs. “We change all the time,” she said. “I think that is a pretty major theme, and a good one for the school.” However, the school has done so while successfully sticking to its core values, she said.

In his closing remarks, Dr. Menifield spoke about the progress SPAA has made so far; the faculty, staff, and students who have contributed to the success of the school; and the need to continue to support SPAA and SPAA students. “We are at a very unique spot right now in the school,” he said. A new strategic plan was passed last fall that “will undoubtedly keep us on a very positive course for the next few years,” he said. “Our objective is to keep moving forward. As we progress, I hope that the students who ultimately become alums continue to give back their time to the institution.”